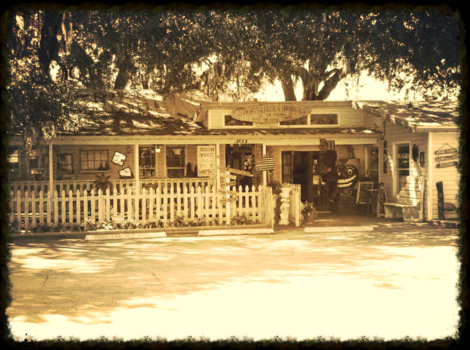 Creepy occurrences in antique store has owner wondering about ghosts

I have personally experienced some of these strange occurrences.
We had the vintage Peter Rabbit book that would move overnight.  Every morning we would find this book in a different location!   One morning we came in and noticed that there was a big old military gas can sitting in the middle of our room. When we went to move it, we found the Peter Rabbit book face down under the can... Freaky!

Laura Cheek opened the door to the shop, then immediately froze.
Before locking up the night before, the antiques store owner had walked the entire building, cleaning and shutting off lights.

But on this morning, a half-dozen toys stood in a circle in the shop's foyer. An open book lay nearby.
"That's strange," Laura mumbled to no one or nothing in particular. She hopes.
Laura didn't know it at the time, but for months, vendors and customers had been quietly whispering about strange happenings at The  Antiques & Uniques in Ozona.
Unplugged lamps flickered on. Spooked pets refused to enter. There was unexplained foot shuffling and crashing noises. One customer who was alone when he felt a gentle tap on his shoulder quietly inquired if someone had died there.
Store workers had chalked it up to customers moving merchandise. Or pranks by co-workers. Or overactive imaginations. Pure coincidence.
But then customers who had patronized or worked in the building when it was a restaurant started sharing tales of ghostly presences who cleaned and neatly stacked china on the floor overnight. Ripped a pot from a wall hook, breaking a woman's collarbone. Sent salt and pepper shakers whizzing across tables. And caused mail to seemingly grow legs and walk itself inside from the mailbox.
The rumors were an open secret until last month, when customer Cindy Foster approached the staff.
"Excuse me. This may sound weird, but has anyone ever reported any paranormal experiences here?" she asked.
It turns out that Foster, an investigator and location scout with the Southern States Paranormal Research Group, had felt a familiar tingle in her arms when she entered the antiques store. To her, the tingle was an indication of paranormal activity. Laura accepted the Lakeland-based group's offer to conduct an investigation in the store.
"With old buildings and antiques, you're going to get some activity because it has so much history," said Foster, 47, of Tarpon Springs. "When I come in here, I just feel a lot of good energy."
To prepare for the investigation, Antiques & Uniques in Ozona asked the public to help provide background information about the building.
As for the Ozona store at 303 Orange St. N, some think the ghostly presence that seems to occupy the older portion of that building is a fisherman who ran Hart Seafood out of what may have doubled as his home. Over the years, the building has also housed a bar, a day spa and an Internet eyeglass shipping company.
Leslie Alfred, who operated the Red Roe Restaurant on the Ozona site in the 1990s, said a previous owner called in a Catholic priest to bless the building.
According to Alfred, Red Roe customers more than once told the only waitress on duty that someone else had already taken their order. At one point, a team of investigators said they detected paranormal activity on the property, Alfred said.
A common myth, said Foster of the Southern States Paranormal group, is that investigations stir up more activity.
"It's a very delicate subject. So many people have paranormal experiences but don't talk about it," Foster said, adding that Pinellas County's history of Indian burial mounds and repurposed buildings makes it a hotbed for residual energy. "It takes someone of the same interests to bring it out."
Store officials know some people may think their story is crazy. And they might agree, said vendor Carla Gillis, except for things that happen overnight or when employees are alone — as in Laura's mysterious toy incident (which, by the way, happened in the same building where a vendor says a Peter Rabbit children's book appears to move itself around the room).
They say that if there are ghosts, the spirits have been nothing but nice to them.